For a limited time, a Minneapolis florist will sell a unique bouquet of flowers to support a Ukrainian flower farm that has been destroyed.

There have been many images and videos shared around the world that show the destruction in Ukraine by Russian forces – but one video hit home for the co-owner of Reveal and flourish Emma Ross.

“I was scrolling through Instagram and found a story, from the Florist Review, about this farm outside Kyiv that was bombed and destroyed,” Ross said. “We are in the floral community and wanted to support this local grower,” she added.

In one Instagram post from Villa Verde Farm, a barn can be seen in flames. Ross said she was able to message the farm owner – hearing that no one had been hurt and that support was coming in from around the world.

“It’s a family farm, the owner runs it with her parents, and her story touched us so much that we just wanted to do something about it,” Ross added.

In partnership with Roses Len Buschin Plymouth, Ross and his team will create and sell pocket bouquets for $35 – all proceeds will go to Villa Verda Farm.

“The sunflower is the national flower of Ukraine, so we really wanted to incorporate sunflowers,” Ross said of the indictment which also includes blue delphiniums.

Orders can be placed now through Saturday and can be picked up or delivered for an additional fee. 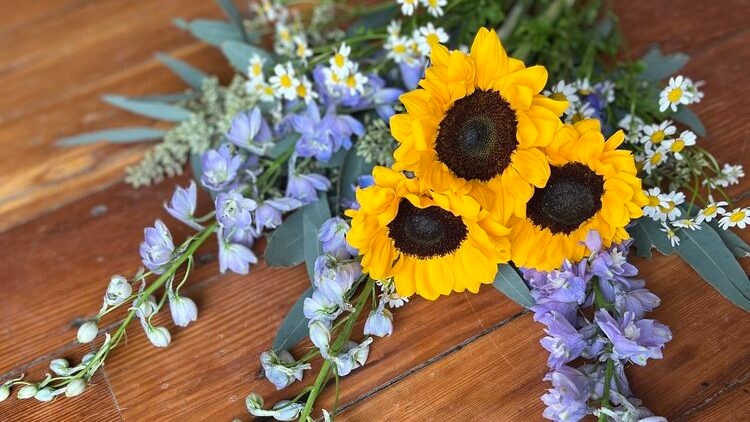 A bouquet of flowers that a local florist is selling to help a Ukrainian flower farm that has been destroyed.

“The only reason we got into the floral business was to create beautiful things and make people happy,” Ross said. “It was something that we could not only [have a] a monetary benefit to this horticulturist, but also spread the joy here at home.